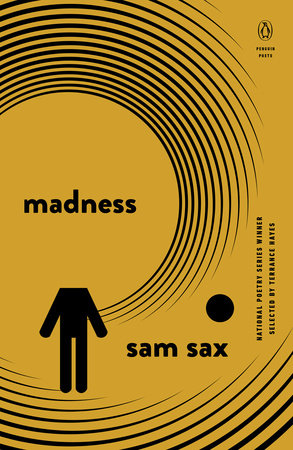 I love the sad wisdom in these lines, which is a sad wisdom that runs throughout this collection. I’d only before heard Sax’s poems, at two readings here in San Francisco, where he spent a number of years. He’s from the performance poetry school: some poems were memorized, some asked the audience to woop at certain breaks, all seemed to draw mysterious things out from his body, which is sturdy and self-possessed about how it fills the space it takes up, like a dancer’s.

Echoes from his past performances came to my ear as I read certain poems, that voice, but on the whole these pages were filled in a variety of ways. Space and line working toward effects beyond what the voice alone can do. The concerns throughout are with mental health, physical health, ailments, drugs, addiction, sex, and the body and its transactions. Sax is younger than me by a number of years, but smarter than me in a host of ways about queerness and ways of being queer in the world we, as above, find ourselves just living in.

“Queers” and not “men”, note. Also that cleaving of sex to poetry, or poetry to sex. “[T]he homosexual since his invention has been a creature held captive in the skull,” he writes in “On Trepanation” (the practice of sawing open a hole in the skull), and it’s a sentiment I felt in my bones. What made this book a gift was how readily Sax found salvation within this world, the one here, outside the skull. Because “heaven’s a city / we’ve been priced out of”, his speakers are here to make as much of this life as they can, no matter the costs.

What Are Your Thoughts? Cancel reply